Sony VS Kenwood Car Stereos: Which Should You Choose?

The head unit is an excellent place to start if you’re considering upgrading your car’s audio system.

Spending loads of money on speakers and amplifiers could be pointless if the sound source isn’t up to par.

Sony and Kenwood are both seasoned players in the car audio space, but which brand will give you the most satisfaction?

Kenwood and Sony have been making various electronic goods for decades, and their in-car audio equipment is comparable. Kenwood is an excellent choice if you don’t mind spending a little extra on a few more features. But, if an extended warranty sounds more enticing, you should get a Sony.

This article will help you choose between Sony and Kenwood by briefly discussing each company and comparing three similarly priced car stereos from each brand.

Read on to find out how each model differs in features, specifications, and performance.

A company’s Japanese car stereo history is usually a great indicator of its products’ quality today.

So, before comparing specific models from each brand, let’s briefly tackle how each company started, the products they manufacture, and their innovations in the field of electronics.

Given Japan’s growing economy and the demand for more consumer electronics, the company started venturing into other products. Sony comes from the word sonus, which means sound in Latin. The company initially gave the name to a transistor radio TTK started mass-producing in 1955.

Since then, Sony has drastically evolved and increased in popularity. They now produce various electronics like cameras, computers, phones, and audio-video equipment. Sony is now a household name thanks to its introduction of numerous innovative products.

Some of Sony’s groundbreaking products include:

Kenwood was also established in 1946 and was initially known as the Kasuga Radio Company. The company changed its name to Trio-Kenwood in 1957 in line with being more modern and efficient. It officially became Kenwood Corporation in 1986, but the Kenwood brand name appeared on its products since distribution began in Los Angeles, California, in 1963.

Kenwood soon established a massive footprint in the U.S. consumer electronics industry and became a global name by the mid-sixties. Unlike Sony, which started manufacturing an extensive range of electronic products, Kenwood’s primary focus was audio and communications equipment.

In terms of technological advancements, Kenwood’s innovations were not as publicized by the media as Sony’s. However, they still played a vital role in shaping a lot of consumer electronic goods we use today.

Some of Kenwood’s innovations include:

When it comes to a Sony vs. Kenwood car stereo, both brands have a vast range of car audio equipment, including receivers, amplifiers, subwoofers, and speakers.

You can get head units from both brands for about a hundred dollars to well over a thousand dollars.

Let’s compare three head units from each brand at separate price points to give you a better idea of what you can get for your money.

The Sony XAV-AX3200 and Kenwood DMX4707S are digital multimedia receivers priced reasonably for quality audio equipment. You can save a minimal amount by choosing the Sony, but let’s see if the Kenwood has what it takes to justify the price difference.

If you’re looking for a 2-DIN head unit with decent smartphone integration, both the Sony and Kenwood have Android Auto and Apple CarPlay. However, they do differ in how they mirror your smartphone.

Sony uses WebLink, allowing you to access YouTube, Yelp, and Zomato. You must download the WebLink host app and connect your mobile phone (iOS13+, Android OS7.0+) to the head unit’s USB port. The host app also allows you to mirror your Android or Apple iPhone through its cast function.

On the other hand, Kenwood’s Mirroring OA app will only let you reproduce content from your Android smartphone (OS7.0+).

You must connect your compatible smartphone to the head unit via a USB port and Bluetooth to reflect the content.

Both head units come equipped with Bluetooth, but the Kenwood has Bluetooth 4.1 while the Sony only has Bluetooth 3.0. Hence, the Kenwood will give your better connectivity and range, aside from taking less energy from your smart device’s battery.

The Sony and Kenwood both have five preamp outputs; two for the front channels, two for the rear, and one for the subwoofer, so there’s room for upgrades if you want to add amplifiers in the future.

In terms of power, Sony has a higher peak power output, but Kenwood has a slightly higher RMS rating.

Both head units come with high and low pass filters for sound tuning, but the Kenwood gives you more frequencies to select. The Kenwood’s graphic equalizer is also more extensive since it gives you 13 bands as opposed to the Sony, which has 10.

See our article on optimizing for the best car audio sound settings for more info on this. 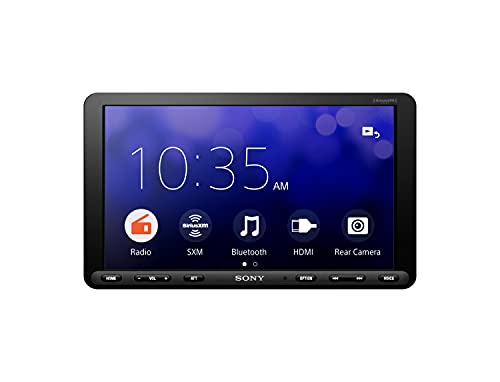 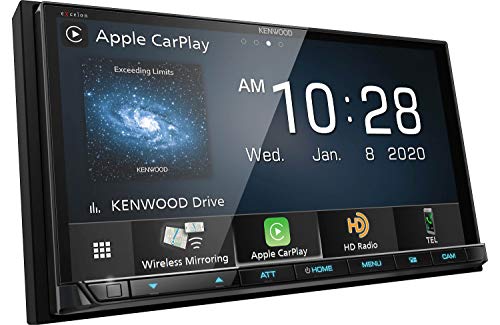 If you’re willing to spend more money, your final choice for a head unit could be a toss between the Sony XAV-AX8100 and Kenwood DMX9707S. The Sony is the slightly less expensive option.

The Sony head unit’s most significant advantage is that it has a bigger screen measuring 8.95 inches, two inches bigger than the Kenwood’s screen. Another advantage is that the Sony has an HDMI input at the rear.

However, if you’re a fan of wireless connectivity, the Kenwood allows you to connect to Android Auto and Apple CarPlay without using cables.

The Kenwood model has more adjustability with its equalizers and high and low pass filters, allowing greater flexibility in tuning your music. It also has six preamp outputs compared to the Sony head unit, which only has five.

Another advantage is that the Kenwood has high-resolution audio playback, allowing you to play lossless audio files like FLAC and WAV.

If you want bigger screens and don’t mind spending well over a thousand dollars, you can choose between the Sony XAV-9500ES or Kenwood DMX1057XR. These high-end head units from Sony and Kenwood have 10.1-inch (25.65 cm) screens.

At this price point, neither head unit will leave you wanting in terms of features. Both head units have 6-channel preamp outputs, high-resolution audio playback, and Wireless Apple CarPlay and Android Auto Wireless.

However, there are some notable differences. The Sony head unit does not have an AUX video or audio input but offers more charging power through its USB port.

Sony and Kenwood are both reputable brands that have proven their worth for decades through multiple innovations.

Regarding car stereos, both brands offer an extensive product range, and not much separates the two in terms of features and specifications.

On the other hand, Sony is less expensive and provides a more extended warranty.