Can You Use an iPad as a Head Unit?

A head unit is also called an infotainment system. It is a component that has a unified interface for your system.

Many cars come with a head unit, which includes GPS, a car stereo, and other features and settings. If your car is not outfitted with one, you may wonder if you can use your iPad as a head unit.

The answer is that you can, and it offers a bigger display and a lot of functionality. While it is possible to install an iPad as a head unit, it can be complicated and difficult to install. Instead, you can fit an Apple Car Play head unit which is purpose-built for cars and has similar features and layout to an iPad.

In a hurry? Our top recommended products to have as an iPad like head unit are:

How to Install Your iPad in Place of the Car Stereo

Many people think that it is only a matter of time before the head unit in many cars is an iPad. Apple Car Play is a segway to this happening in the future.

See our car-specific guides to find the best wireless Apple CarPlay method for your vehicle.

If you are still adamant you want to replace your car stereo with an iPad, it is possible. But, you’ll need to start with a mounting kit.

You can find an iPad dash kit that is compatible with your car. The kit should include the plastic mount body, the iPad, and some magnets that will connect it to the dashboard.

You can also play music, and you can see your messages and take calls. However, this will not come through your car’s audio system unless connected via Bluetooth.

Watch this video example of an iPad dash kit install:

Tips for having a built-in iPad

Benefits of Using an iPad as a Head Unit

You can listen to your music library, or you can use apps such as iHeart radio or SiriusXM. You can also use any streaming services that you subscribe to, like Amazon, YouTube, Spotify, Apple Music, SoundCloud, and more.

You can use your maps apps, such as Waze, Google Maps, or Apple Maps, and have a large display with directions when driving in unfamiliar territory.

This can make it easy for you to get where you are going or to find a store where you need to stop; as long as your iPad is connected to the internet via its own data plan or by personal hotspot, you’ll be able to do all the amazing things your iPad can do while on the open road.

Just don’t use it while you’re driving, as this is highly illegal in many countries.

It can tell you the weather (similar to CarPlay weather apps), and show you your text messages and your phone calls. In addition, you can use Siri so that you don’t have to touch the screen.

You can download an app such as gas buddy, which will tell you the best prices for gas near you. It will also tell you if there are wait times. This is an excellent option if you want to find the best deals on gas.

There are far more features by using an iPad rather than a built-in head unit, but it can be challenging to install, and it’s worth remembering that an iPad is not designed to be installed in a car.

Many car head units have a safety feature that does not allow you to watch videos, for instance, while driving, so as not to cause a distraction. E.g., Playing Youtube in your car.

How Much Does It Cost to Install an iPad as a Head Unit?

People often decide to install an iPad as a head unit because it does a great job.

The simple way to install it is to get a mount that holds it in place. This is very inexpensive, and you can do it yourself.

However, you can also remove the current head unit and replace it with your iPad. This is more involved, but there are custom kits that you can use to install the iPad directly into your dash.

You can pay anything from $100 for an iPad install, or you can pay around $800 or more to have someone install it professionally.

As we’ve said, instead of hard mounting your iPad into the car, it may be worth considering getting a dashboard mount, as can be seen in the picture.

These are relatively inexpensive, sort of like an iPad car stereo replacement, and can be picked up on Amazon, such as the Woleyi Telescopic Tablet Mount.

This will then allow you to easily remove the iPad from your car so that it doesn’t get stolen or so that it can be used somewhere else. 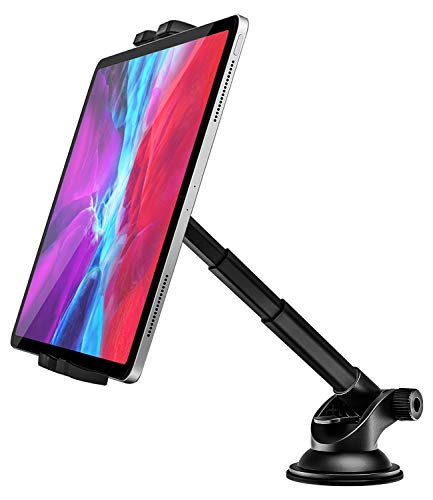 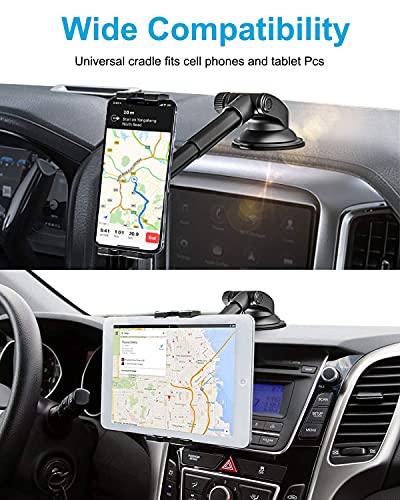 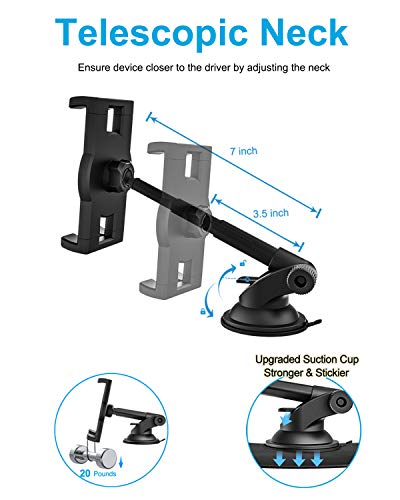 【Broad compatibility】This universal dashboard tablet holder for car, the adjustable side clamps extend from 4.7 in to 10.2 in, compatible with all 4 – 13 inch smartphones and tablets.

All the above options will work for all iPad models, including the Pro and the mini models allowing an iPad in-car dash experience.

Just consider if you’ll have room in the dash for each option.

While you can install an iPad in your car as a head unit, it will provide you with everything you need in your car it is not the best solution.

If you wish to use your iPad as a driving aid, it may be better to use a tablet mount rather than hardwiring it in place.

There are many car-specific stereos that have Apple car play installed, which have similar features to an iPad, such as wireless CarPlay, and are more well suited to the car experience.

Lastly, consider how long you’ll be keeping your car and if it is worth the time and money to hard mount the iPad. There are also potential resale problems if the new car owner wants a stereo rather than an iPad dash mount.

Meaning they could reduce the car’s sale price to compensate for the cost of a new radio.

Alex
I loved my car but was frustrated with my media system. So I upgraded my stereo, making silly wires and precarious phone mounts a thing of the past. The Apple Car Play stereo was so good I wanted to show more people how this could be done and truly upgrade their cars multimedia system! Founder StereoUpgrade.com
Recent Posts
Apple CarPlay Data Usage: How much does it really use?
Read More »
How to adjust Apple CarPlay Brightness?
Read More »
Alexa CarPlay: Can I use Amazon Alexa with CarPlay?
Read More »
Apple Maps Satellite View CarPlay: Is it Possible?
Read More »